When people are working up the courage to get their first acupuncture St Albert treatment. They may want to ask several questions. To help them feel more comfortable about getting the procedure. And to understand the truth instead of the myths about this procedure. 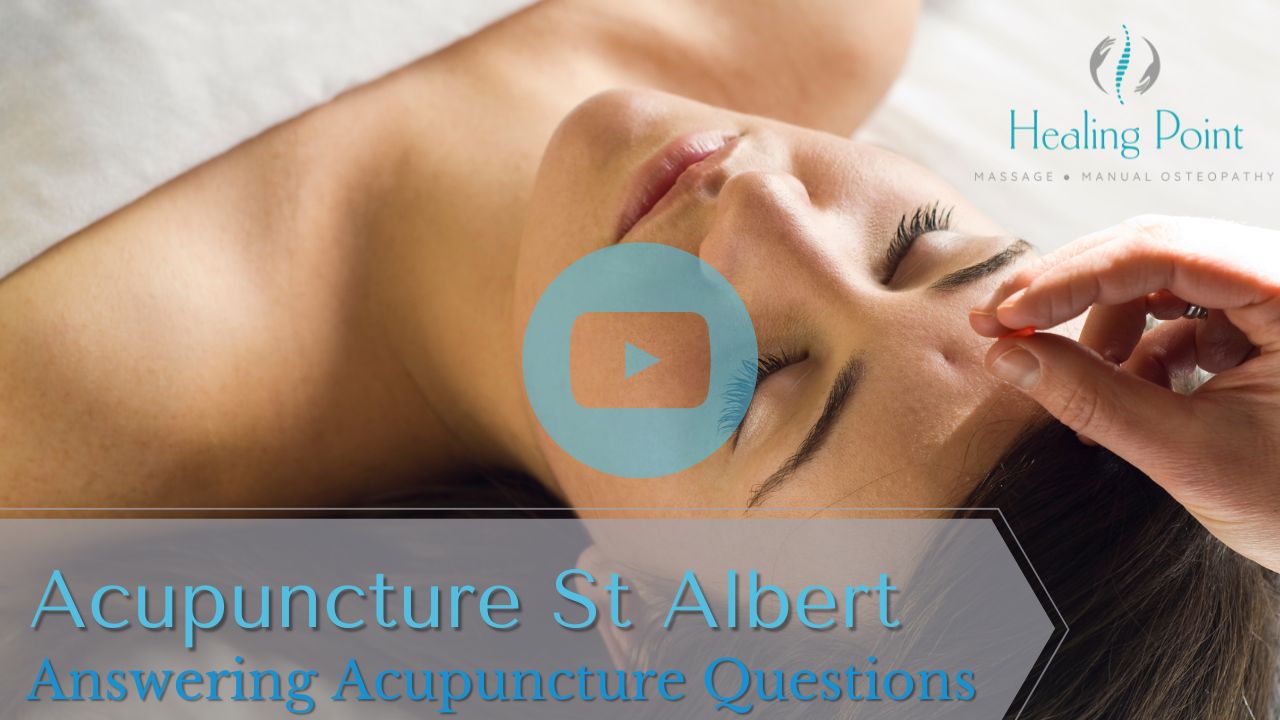 One of the first questions that people ask healing point massage therapy. When they book in for their first acupuncture appointment. Is simply wondering what acupuncture is. They often know that it can sometimes utilize needles.

Acupuncturists in Alberta merge ancient Chinese medicine. With current biological information. To come up with a westernized style of acupuncture St Albert treatments. It can use the insertion of very fine and stare I will needles.

Into various points in the body. There are many different reasons that the needle may be placed. It can increase circulation, minimize pain. And stimulate different parts of the body.

Many people often want to know. How deep the needles are going to be placed. While this varies, depending on each patient, what acupuncture St Albert treatment they are getting.

What part of the body is getting needled. And what result they are trying to achieve. They needles may be placed superficially into the skin. Just by poking the surface of the skin. Or a couple of millimetres at most.

To anywhere between half an inch, and 2 inches. If they are trying to stimulate healing. In an extremely large muscle, like the glutes. Therefore, it really does depend on each patient, and their treatment.

However, acupuncturists want their patients to know. That no matter how shallowly. Or how deeply the needle is going to be placed, nobody should be feeling any pain. That, in fact is another question people have.

Wondering if acupuncture needles hurt. Acupuncture should not ever hurt or feel uncomfortable. Not only are the needles as thin as a piece of human hair. There also incredibly sharp. Which means the combination of the two, should not.

Give much of a sensation, or pain when they are placed. However, there may be an initial sharp sensation. When the needles are initially placed. But that should not be very uncomfortable.

And should only last 3 to 5 seconds. If it lasts longer than that, patients are encouraged to let their acupuncturist know. So that they can remove, or replace the needle. So that it is not uncomfortable.

However, there are some normal sensations. That people may feel during their acupuncture St Albert treatments. Including a tingling sensation, itchiness. Feeling heavy in the area that the needle was placed, or adult eight.

All of these are normal sensations. And simply indicate that the needles are doing what they are meant to do. If people would like an initial consultation. They should contact healing point massage therapy today.

So many people want to try acupuncture St Albert treatments. But are very nervous, getting all of their questions answered can help put people’s minds at ease. So that they will be more likely to try this very beneficial therapy.

One common question that people have. Prior to booking their first acupuncture St Albert treatment. Is wondering how safe acupuncture actually is. They feel nervous, knowing that it involves placing needles into the skin.

And they want to know if it is going to open wounds in their body. That can be a magnet for bacteria. Or, it is going to cause them to feel pain, or bleed uncontrollably.

While hemophiliacs should definitely avoid acupuncture for obvious reasons. There are different modalities that the acupuncturist can use. During their acupuncture St Albert treatments, that do not involve needling.

This can include things like moxibustion, myofascial cupping. Gouache therapy, and more. They also can utilize what is called acupressure. Which is placing pressure on the same acupuncture points.

But not puncturing the skin with the needle. This is often what is used for acupuncture in children. Because acupuncturists do not want to leave needles in the children’s bodies. Simply because they usually do not have the ability. To lay as still as they need to, for traditional acupuncture.

However, the acupuncturist can still place the needles. And then remove them immediately, so that they can have the benefit of acupuncture. But ultimately, acupuncture is incredibly safe.

And acupuncture St Albert utilizes single use acupuncture needles. That are not only exceptionally fine. About the width of one piece of human hair. They are also sterile, and incredibly sharp.

Acupuncture does not use medication, so therefore not only is it safe. It is non-toxic. Which means children, seniors and pregnant women. Can utilize this beneficial therapy.

Another question people often have. Is wanting to know how deep the acupuncture needles go. This is going to depend significantly. On what area of the body is getting treated. As well as what the goal for treatment is.

For example, pain relief treatment is going to require. The needles be placed at deeper depth. Then needles that are being placed for an emotional release for example. The latter only needs to have the needle pierce the skin.

And will only be placed a millimetre or too deep. Where is the pain relief needles will need to go anywhere between half an inch. To 2 inches deep, in order to encourage the healing that needs to take place.

People like more information about acupuncture St. Alberta treatments, all they have to do. Is visit the healing point massage therapy website. Or, book themselves in for an initial consultation. They can do that by calling the office.

Or visiting the website, and booking through the websites at their convenience. The sooner people can book in for their first acupuncture appointment. The sooner they are going to feel the benefits that this form of ancient Chinese medicine can provide.